My first attempt at Mt. Whitney kicked my butt and it has kept me coming back for more. So when I wasn’t awarded permits from the lottery system in April, I decided to hike to the summit one of the longways. The whole 72 miles, West to East across the Sierra Nevada Mountains, that make up the High Sierra Trail.

The High Sierra Trail also ended up being my first thru-hike, my longest backpacking trip by miles and by days, and honestly the hardest hike that I have ever done both physically and mentally. After 6.5 days on the trail, standing on top of Whitney with no altitude sickness, knowing I made it across the mountain range with a heavy pack (45lbs) was worth every tear and blister along the way.

The trail starts in the West from Crescent Meadows in the Sequoia National Park and runs to the East across the mountain range to the Mt. Whitney summit and down to Whitney Portal. The High Sierra Trail goes over the Great Western Divide, down to the Big Arroyo and Kern River Valley, then up again to where it connects to the John Muir Trail and the Pacific Crest Trail, and finally finishing on Mt. Whitney. 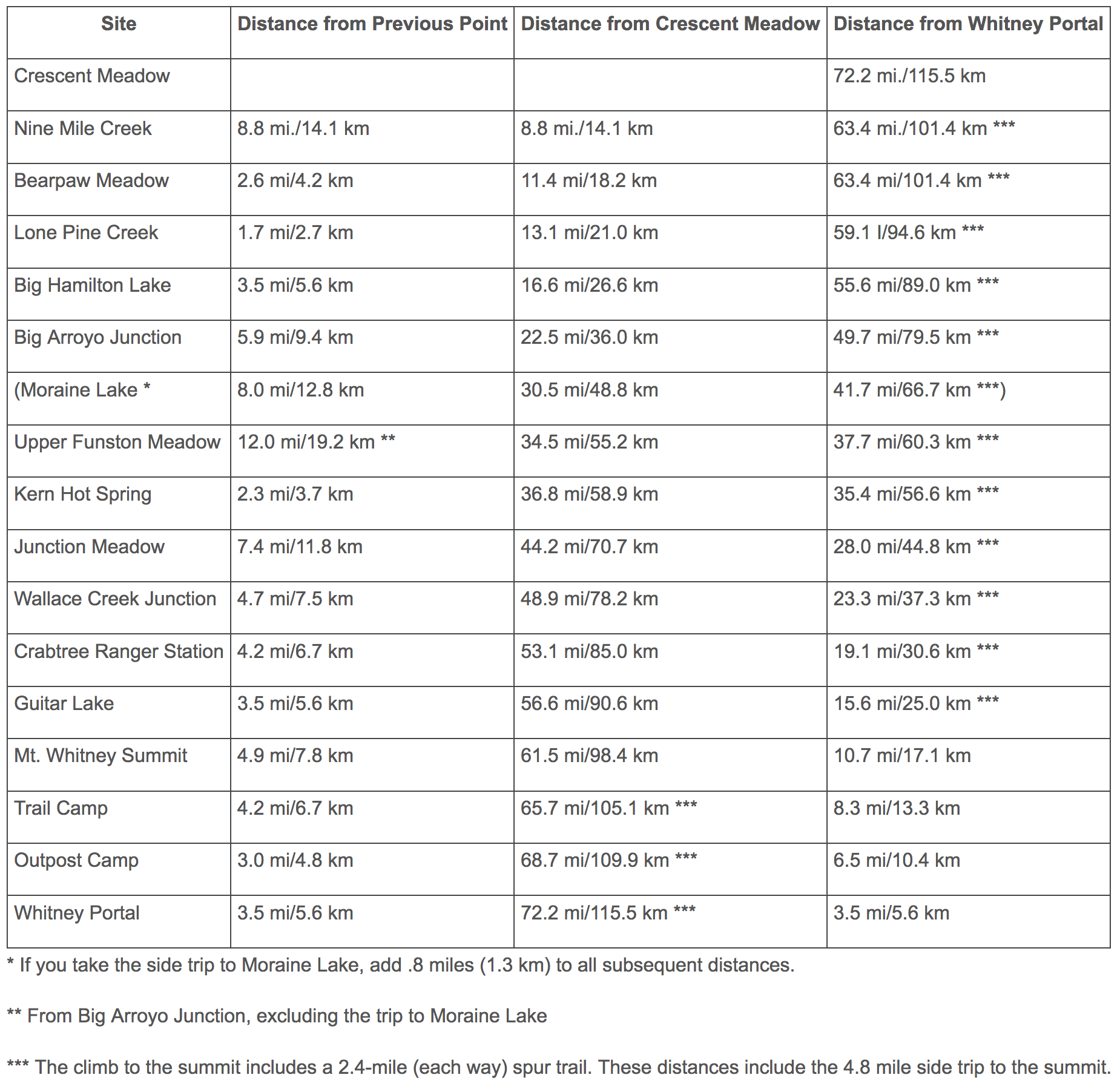 Bear Canisters Required: Yes in the spring and summer months until Nov 1.

Now the ins and outs of planning the trail and the day by day breakdown of my itinerary: 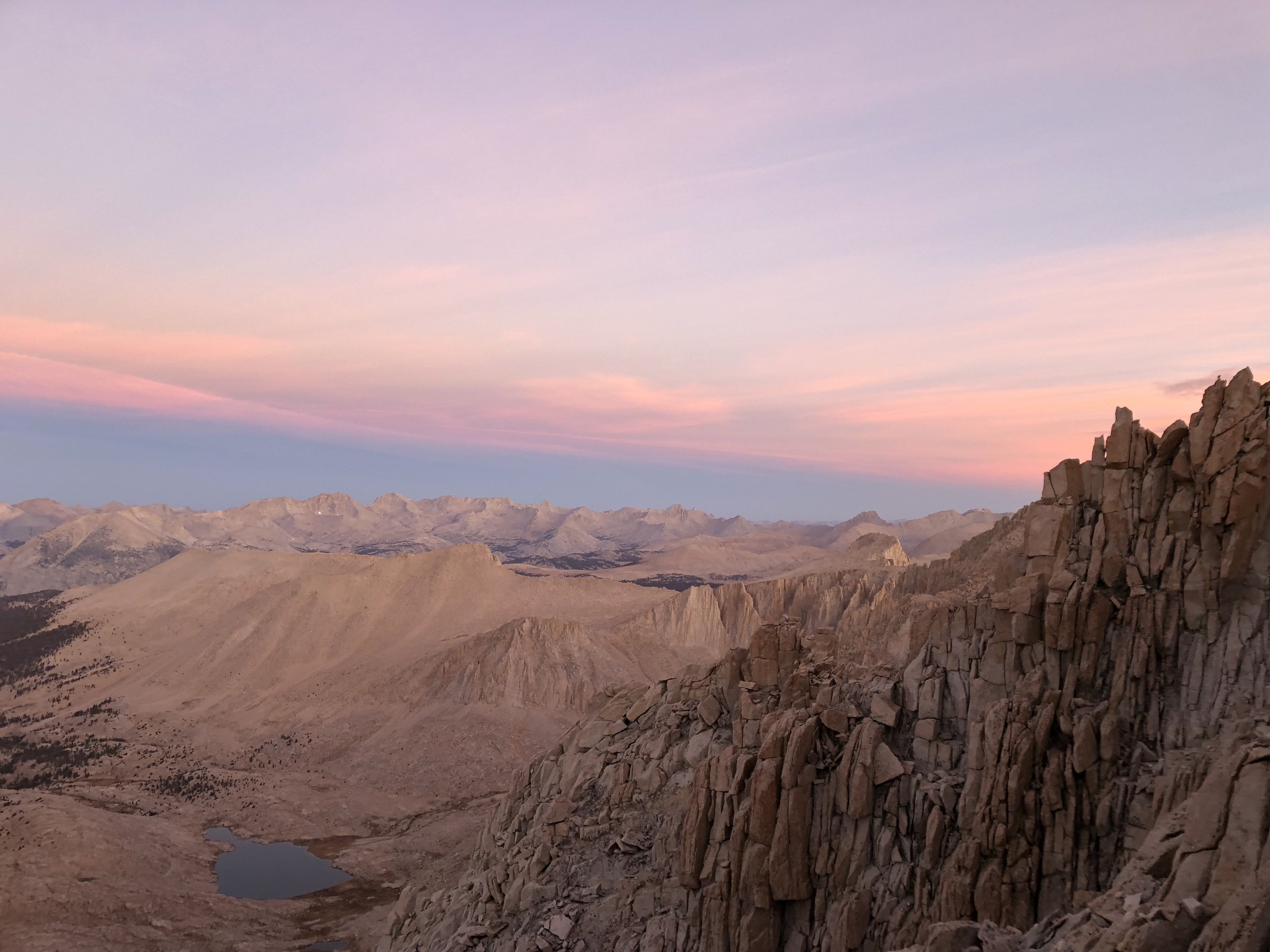 During the quota season –

To hike the trail during the quota season, you email your PDF application on or after March 1 at 12:01 am to the SEKI wilderness office (seki_wilderness_reservations@nps.gov). Emailed applications before that date will not be processed. It takes them a couple of weeks to get back to you because they go through all of the emails manually and award dates based on a first come first serve basis of when the emails come in. Then they will email you which dates you were awarded and a link to submit payment and you’re done with that!

Outside of the quota season –

There is no quota to backpack the wilderness for the fall, winter and spring months. But permits are still required! So you still need to go to the wilderness office before your trip and get a permit but you can have a group of 2 or 12 join you. I went in late September when the weather is cooler, especially at night, but manageable. 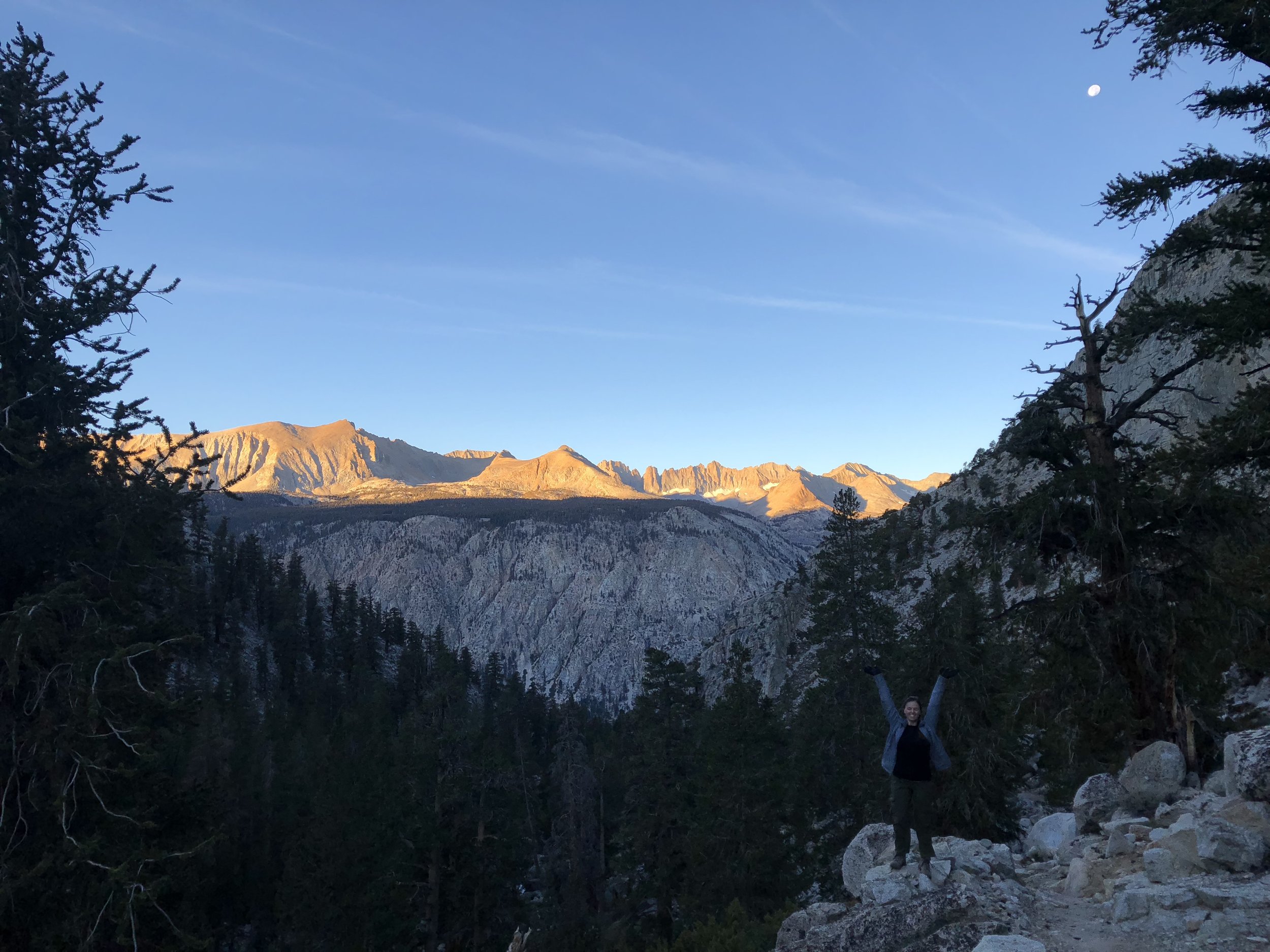 There will still be snow on the ground, especially at higher elevations. Some of the crossings and passes will be very difficult and dangerous during these months (and possibly into early July).

The best conditions! Typically no snow on the ground, nights won’t be cold, water readily available almost everywhere. But there are more bugs and some of the water crossings will be difficult and fast moving. Days will be warm, sometimes humid. Afternoon thunderstorms are common.

No snow on the ground, fewer bugs, easier water crossings but the nights will be cooler.

Days are mild, the nights will be cold, some of the water sources may be dried up but the crossings will be easier! There is also a possibility of snowstorms.

Now, this is probably the hardest part of planning the hike since the trail runs West to East (or vice versa). There are a couple of options, but some of them are off-limits outside of the quota season.

I prefer to have my car waiting for me at the end of a hike so I’m not relying on others for transportation at the end when I’m exhausted. I left my car at Whitney Portal and hired the Eastern Sierra Shuttle Service to drive us from Whitney Portal/Lone Pine to the trailhead at Crescent Meadows in the Sequoia National Park. For a 12 person van, the Eastern Sierra Shuttle Service charged us $1,200. If you mail them your key, they will also drive your vehicle from the start of the trailhead to the end for roughly the same price.

There are other options!

Have someone drop you off at the start and pick you up at the end. Or…

If you go during the quota season, before or during Labor Day, there is a shuttle service that runs from Visalia to the park. You can have someone drop you off in Visalia, you can fly to Visalia, you can take buses or trains there. There are also buses that run from Lone Pine to Visalia.

My total pack weight was 45 lbs. That was with 2L of water, 8 days of food and winter gear in case it got chilly, which it did! 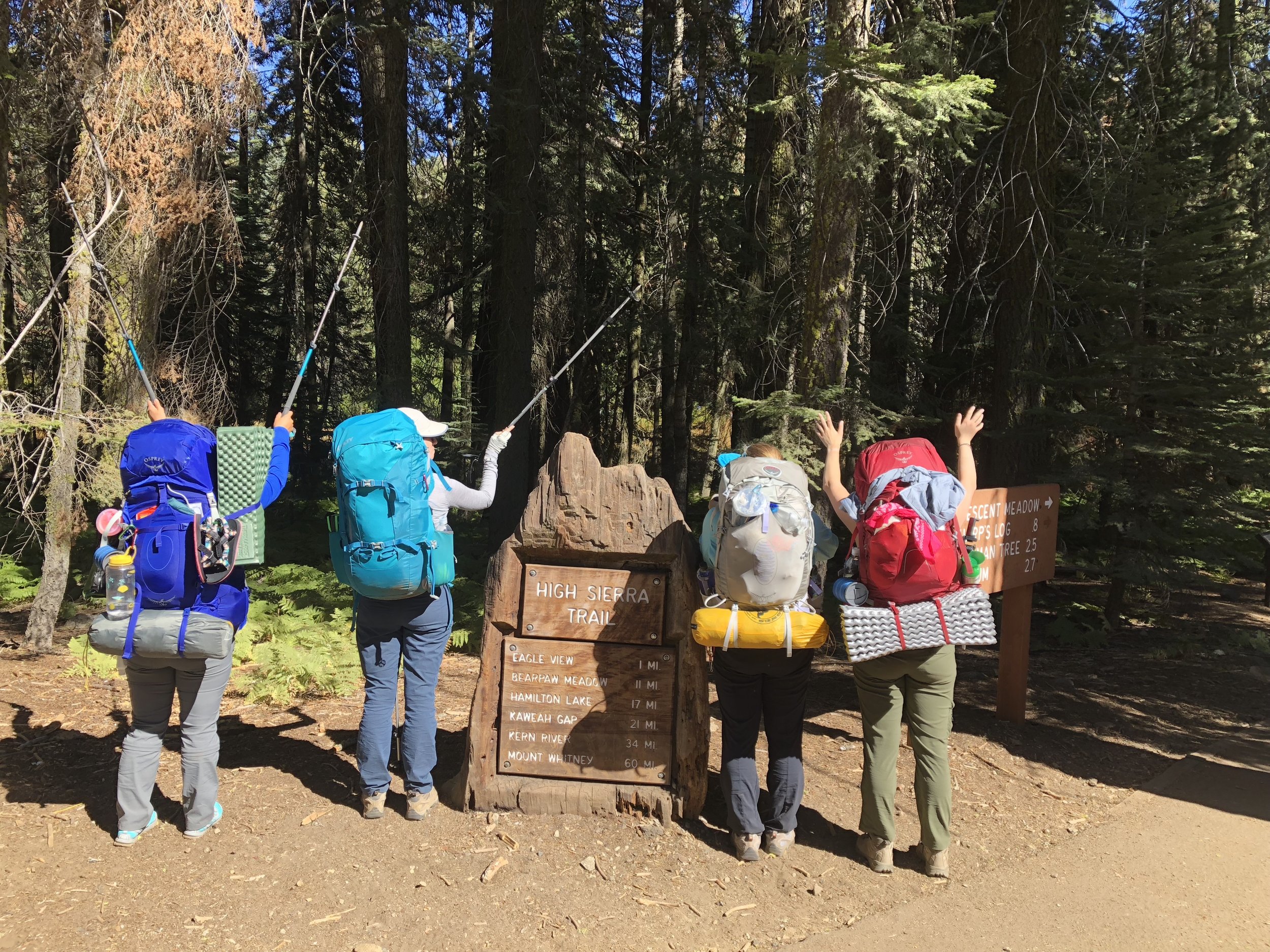 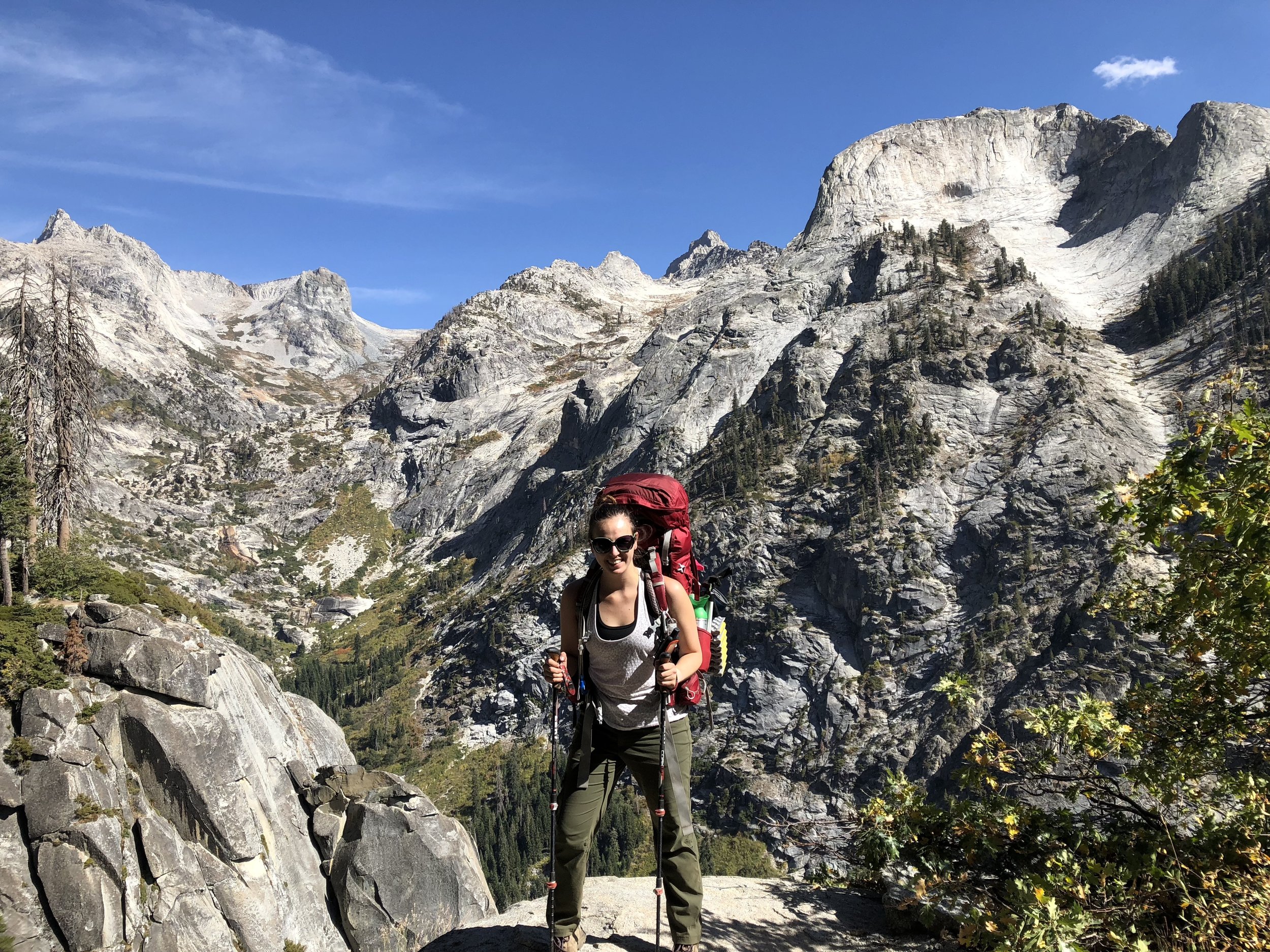 My total pack weight was 45 lbs. That was with 2L of water, 8 days of food and winter gear in case it got chilly, which it did!

Bags for trash and used TP

**You do not need to bring these items if you are going in summer conditions.

For more on what to bring backpacking, look through my current backpacking pack list.